“Through the Dark Corner and the password is Silver Snaffles," repeated Tattles. His voice was not like a human voice. It was the sound of hoofs thudding on the turf, of bits jingling and saddles creaking and of a horse nickering to his friend, all mixed into one and making words.”
Silver Snaffles is the magical story of Jenny, who longs to learn to ride and has her chance when she follows the instructions of Tattles, the pony that she visits every day. After uttering the password, Jenny finds herself in a parallel world where ponies can speak. She meets ponies Cock Robin, Shannon and Jasper who teach her to ride and to look after them before she goes through the mist with another boy, Peter, to rescue Pippin, a lost Snaffles pony.
Preview of Chapter 1.
Available now: Ordering Information. 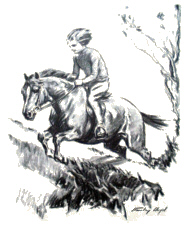 During the Second World War Primrose left home and joined an anti-aircraft unit of the ATS and was stationed in various sites around the country. After her demob, Primrose returned to the family home and continued to write, latterly for girls’ comics published by D C Thomson of Dundee when pony books waned in popularity.

A keen traveller, Primrose trekked on horseback in Spain, France, South America, the Scottish Highlands and the Hungarian Plains. She followed in the footsteps of Lawrence of Arabia by camel and took part in an elephant safari in Nepal. Her detailed travel diaries covered trips as diverse as the Arctic Circle, the English Midlands, Iceland, Tuscany, Russia and China, where, on the Great Wall, she met an old comrade from her ATS days, some 40 years earlier.

The first title to be published by fidrabooks will be Silver Snaffles, an elusive title although probably Primrose’s best known book.