Fly-by-Night was not the best choice for an eleven-year-old girl who had never ridden before; but as soon as Ruth Hollis saw the sturdy, lively pony, she knew that he was the one she wanted. All her life Ruth had longed to own a pony and now that her family had moved from London to a new housing estate in East Anglia, she had persuaded her father to let her spend her savings on a pony. But having taken possesion of Fly-by-Night, Ruth found that her troubles had only just begun.
Preview of Chapter 1.
Available now: Ordering Information. 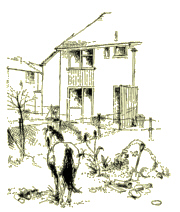 K M Peyton was born in 1929 and wrote her first book at the age of nine. It was called Grey Star, the Story of a Racehorse. Several books later, her first was published when she was fifteen. Sabre, the Horse From the Sea was followed by two more pony books written under her maiden name of Kathleen Herald. Since Sabre, Kathleen has written an average of a book a year and has had around sixty published. At first Kathleen only wrote pony books as, growing up in a London suburb, she could not have a horse of her own so put her pony-obsessed daydreams down on paper.

Later, Kathleen went to art school, where she met her future husband, Mike Peyton. Although she wanted to be a painter, she was already committed to her writing and that took precedence. She has, however, illustrated many of her books, including Fly-By-Night and The Team, as has her husband, best known for his sailing cartoons. Kathleen has commented that she and Mike are very lucky in that they have been able to combine work with pleasure all of their lives.

The Flambards trilogy and its later sequel, Flambards Divided are Kathleen’s best known novels, winning a number of important awards and being turned into a popular TV series. Fidra Books will be publishing Fly-By-Night and The Team, the first expected around Christmas 2006. These introduce Ruth Hollis, the tenacious heroine who is determined to make something of the unbroken pony she has rather rashly bought and her later exploits with the flamboyantly named Toadhill Flax. We have chosen these books because they are personal favourites which are still popular with readers despite being long out of print. Kathleen will be writing forewords for both of these books and as always we will be including all the original illustrations.