Up on the hills above Clarig in north-west Scotland where Alison Campbell and her family live, lies a loch with an ancient legend about a witch. One day Alison and her friends go to the loch for a picnic and to explore the witch’s cave but while there they see a man acting in a very suspicious manner. There have been other mysterious events and Alison and her brother Niall decide to find out what is going on, especially as their uncle is also behaving rather oddly. As they uncover the truth, they discover that there is an unexpected connection between the mystery and the witch’s cave.
Preview of Chapter 1.
Available now: Ordering Information.

Clarig, that fascinating spot on the coast of Sutherland, where Alison and her brother Niall and their friends seem to find plenty of excitment at any season, provides not only ample open-air fun and adventure at this particular Christmas-time, but another mystery to unravel. Is the Professor's interest in geology genuine? If so, why are some of his movements so suspicious? And how is it that both Alison and her uncle have a feeling that they have seen him before? Events prove that not rocks, but something very different, are behind the Professor's activities.
Preview of Chapter 1.
Available now: Ordering Information. 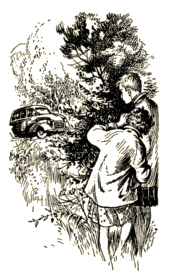 Sheila Stuart, whose real name was Mary Gladys Baker, was born in 1892 and brought up in a Manse in Johnstone in Renfrewshire where her father was a Church of Scotland minister. After school in Glasgow, Sheila Stuart later went to Leng and Co of Dundee (later incorporated into D C Thomson) where she trained as a journalist, although during World War One she worked as a VAD.

She wrote a number of short stories and serials for periodicals, such as Scottish Field and the Dundee-based People’s Friend and also wrote a number of books about antiques. However, Sheila Stuart is best known for her series of books about Alison and her brother Niall, based in the north-west of Scotland where she spent a great deal of time and which she captured very realistically in the background to her stories.

Sheila Stuart died in 1974 in Crieff, Perthshire, where she had moved on her husband’s retirement.